To share your memory on the wall of Robert Lynch, sign in using one of the following options:

Provide comfort for the family of Robert Lynch with a meaningful gesture of sympathy.

We encourage you to share any memorable photos or stories about Robert. All tributes placed on and purchased through this memorial website will remain on in perpetuity for generations.

Bob owned a firm in New York City that did TV commercials for major firms. One of them was Budweiser. I visit his studio in manhattan and he is in the middle of ediring a commerical wit Ed McMahon and the power boat Miss Budweiser in the background. I am amazed at his expertise. he told me to bring a cassette tape of the Old bridge Friendly Sons Pipe Band and a script for the announcer to read with pipe band music in the background. He aske announcer who does all of the Exxon commercials to do the voice over gratis. I pick up the tapes the following week and deliver them to radio hosts all over New York. Thirty one thousand people show up at the 1971 Friendly Sons Irish Feis and Scottish Games. Bobs commercial was the reason for that turnout.
always enjoyed his company and his stories. Thank you Bob for all you have done for The Friendly Sons. Rest in peace in heaven with your beautiful bride.
Jerry Kennedy
Comment | Share Posted Aug 20, 2019 at 06:09pm via Condolence
LP

Dear Colleen, Tony, Colton and Lynch family. We are so sorry for your loss. Our thoughts and prayers are with you now and always.

Love, Ann and Paul purchased flowers for the family of Robert Lynch.
Order Now | Show All
Comment | Share Posted Aug 17, 2019 at 08:14am via Floral Arrangements
BF

Our condolences and sympathies to you all. We will always remember his fun and funny personality. 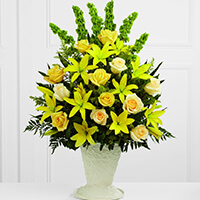